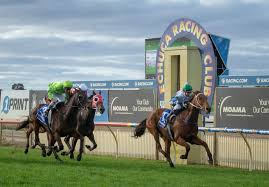 Echuca sits on the banks of both the Murray and Campaspe Rivers in Victoria, Australia. The name is Aboriginal and means Meeting of the Waters, which is fitting considering how important these rivers have been to the town. Echuca is quite small, but is certainly bustling thanks to its being a port city. Several sports clubs add to the local flavour, including two Football teams; a Harness Racing Club; a Golf Course and, most excitingly, a Horse Racing Club where the Echuca Cup and several other prestigious races are run.

The Club was founded in 1864, and soon became very popular. Many people from various regional towns would come to see the races, which ultimately led to a dedicated railway line being built from the train station to the racecourse to accommodate the Race Trains The Club experienced a dip in popularity between Wars One and Two, but enthusiasm for racing has boosted it again and today it hosts several races including the Melbourne and Echuca Cups. The world-class facilities make every event an enjoyable day out.

The Echuca racecourse is run anti-clockwise, as is typical for Victoria, and has a straight of 353 metres. The width of the track is 10 metres before the straight, at which point it widens to 33 metres. All of the turns on the course are well-cambered and wide, and the track is fully irrigated so that it races well all through the year. The field limit is always 14, except for the 1,000 metre start when it is 10.

The Echuca Cup Itself

The Echuca Cup is run over 1,400 metres and has a total purse of 70,000 Australian Dollars, so it attracts many of the best competitors in the country. Other events on the day’s race card include the Shadoways Sprint with a total of 40,000 Australian Dollars in prize money, and punters will enjoy analysing the horses and jockeys, speculating on who will win – and of course, taking home big payouts with horse racing betting! Aside from the race track conditions mentioned above, they should consider weather conditions on the day, recent past performances, any other tips they can find out, and how all of these factors influence each other.

The Cup is the main event in a Carnival that is held over the March Labour Day weekend every year, and there are plenty of festivities to keep everyone happy. Families and friends can relax over picnics on the lawn, while there are more upmarket options for those who want to romance a sweetheart or hobnob with potential business partners. Shuttles operate throughout the day to deliver people from all over Echuca at the racecourse, so there are no driving or parking issues. For those visiting from out of town, there are several accommodation packages to suit every budget and lots of other attractions to round of the weekend including The Cape Horn Vineyard and The National Holdem Motor Museum. Live music, children’s’ entertainment and the iconic Fashions on the Field Event make the day at the races itself a delight on every level, for serious and casual punters alike.